When 21-year-old Nicole Grimes was searching for a dog to adopt, a strangely familiar senior pooch caught her attention. She had a strong feeling that it was the same dog she had in her childhood. After seven years of being apart, Nicole is now reunited with the pup she always loved.

As a little girl, all that Nicole ever wanted was to have a puppy. She wanted a pet that she’d cuddle with, play with, and share many good memories with. The puppy was going to be her best friend.

At the age of 10, Nicole’s dream came true. Her mom and grandma had a nice little surprise for her, and it came with four-legs, thick black fur and a cute pink ribbon between its ears. The Pomeranian-poodle mix sat on her grandma’s lap, looking so cute and adorable. When her Nana said that the pup was hers to keep, Nicole was overcome with happiness.

Nicole named the puppy Chloe, and it was everything she wanted in a pet dog. They’ve been together for four years, and everything was going great until Nicole’s dad took a customer service job.

At the age of fourteen, Nicole’s family relocated to Pennsylvania. Her dad was a customer service agent who was always on the phone. Unfortunately, Chloe’s barking issues got in the way of Nicole’s dad’s job, so they had no choice but to give the pup up. 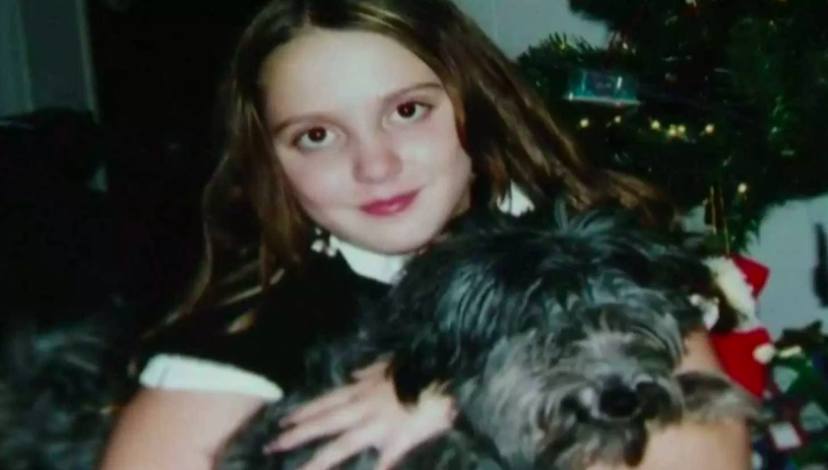 Nicole could very well remember how heartbroken she was when her dad drove her to a shelter. She left Chloe there, praying that a loving family would take her pup in.

Seven years later, Nicole is happily married and blessed with a daughter, Violet, and son, Jonah. She also thought it was high time they get a pet dog, so Nicole started looking for one on the internet. While searching, a post about an adoptable senior dog caught her attention. The dog resembled her childhood puppy so much, and it was even named Chloe.

Nicole didn’t think twice about adopting the senior dog. As soon as she met Chloe, her intuition became stronger. Chloe connected instantly with her, and Nicole believed it in her heart that this was the same Chloe she had many years ago.

To confirm her theory, Nicole gathered Chloe’s microchip information from her mom. She then took the newly-adopted senior dog to the vet for a scan as well. The scan matched, and it was the only confirmation Nicole needed to say that this senior dog, was indeed her childhood puppy.

Fortunately, after Nicole left Chloe at the shelter, the dog was adopted by a loving senior couple. Chloe was loved and cared for until the couple passed away. And it was destiny that brought Nicole and Chloe together, right at the time when Chloe needed a new home, and Nicole was looking to adopt a new dog.

Nicole is delighted to see and be with Chloe once again. Now, Chloe has settled in nicely in Nicole’s home and is loving every moment she spends with Violet and Jonah. Nicole might not be able to get back all the years she and Chloe spent apart, but now they have all the time to make up, and every moment will surely be worth it.

Thanks to Nicole Grimes